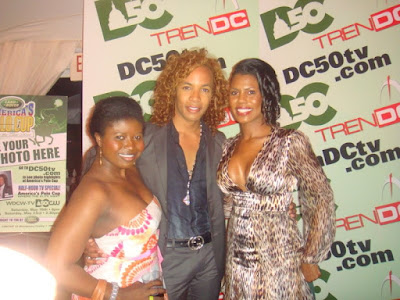 This past weekend was one of the busiest for Washingtonians. Celebs were in town waiting to be scene on the red carpet and hob knob with journalists, politicians and most importantly, the Obamas at the annual White House Correspondents Association Dinner. This was a two day event with tons of pre- and post-parties at the St. Regis, Corcoran Gallery of Art, the Hilton hotel and Teatro Goldoni. Despite Hollywood descending on our nation’s capital, the city kept going with other parties, galas and stayed true to its charity scene.

Those who skipped the St. Regis party went hit the polo grounds in Montgomery County for the America’s Polo Cup Fashion Show and Battle of the Coral Sea Gala on Friday night. Despite the rain and the wet fields, which the event planners failed to tell the hundreds of guests, the show still went on, and it was a blast. American Idol star Michael Johns premiered his two newest singles “Dangerous” and “Fire.” We also got a chance to meet Olympians, reality television stars, Australian and American polo players and others B-listers who always charm crowds and keep the party going.

Check out the video of the fashion show staring the Redskins Cheerleaders, Michael John and models from America’s Next Top Model. Fashion show part one.

Subscribe to the Glamazon Diaries newsletter to get more fashion tips, news and events.