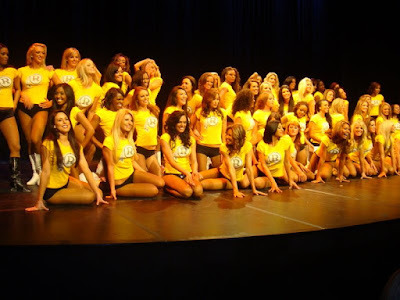 Glamazon Diaries fan Jessica Andrews, a former Washington Redskins Ambassador invited me to watch the final auditions for the 2009-2010 Washington Redskins Cheerleaders at Bethesda Theater last night. It was definitely a site to see. Over 100 guests – friends, family and fans – packed the small theater to watch the 55 girls audition for 46 slots (43 plus 3 alternates).

The girls opened up with cocktail wear then transitioned into their dance outfits to wow the crowd with their learned routines. After seven days of grueling training, most of the girls nailed their routines. They then got into bikinis and strutted on stage holding footballs. All I have to say is that they were all had confidence to rock a bikini and looked fabulous doing it. Among my faves were Kelly, Jamilla and Dawn, who all made the team.

My favorite routine was a lyrical piece performed to Beyonce’s single “Halo.” The girl on the left was among my favorites but unfortunately she didn’t make the team. She was excellent though. I give all the girls major kudos for owning that stage.

This video is faster tempo song. The girl in the front is one of the Captains this year. Hail to the Redskins!