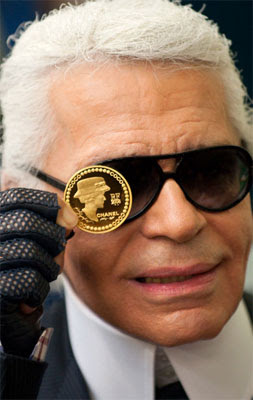 Karl’s done it again. First it was the release of a teddy bear in his likeness but now Karl Lagerfeld has taken it a step further – in the right direction – with a limited edition release of Chanel coins.

The coins, which go on sale on December 1, 2008, have been produced to commemorate the 125th birthday celebration of Gabrielle ‘Coco’ Chanel and feature a portrait of Chanel on one side and the number 5 on the other.

Two silver and two gold coins in denominations of five euros to celebrate Chanel’s best selling perfume, Chanel No. 5. Want to get your hands of one of these coins, well it’s going to cost you a pretty euro. The set of four coins will be selling for $5,900 euros or $7,600 dollars.

Sure it’s expensive but if you are a Chanel lover or know of one, this will be the ultimate Christmas present. There will be only 11,099 coins available and once they’re gone, they’re gone!