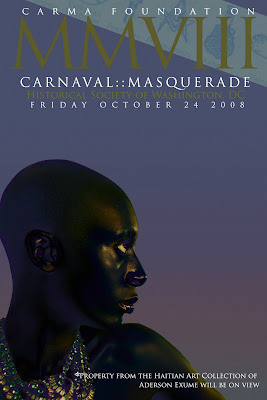 The Washignton, DC fall charity gala and ball season is full swing with a plethora of must attend events. Though every cause is special and worthwhile, one of the must attend charity events of October is the CARMA Foundation‘s Carnaval: Mascarade MMVIII on October 24, 2008 at the City Museum.

Join Melky Jean, Wyclef Jean’s sister, His Excellency Raymond Joseph, Ambassador to Haiti, the Honorable Marion Barry, Council member in the District of Columbia, the Historic Society of Washington, DC Arts & Humanities Education Collaborative, Haiti Art Society and a host committee of some of Washington’s movers and shakers for a night the Fete de Carnaval et Mascarade to raise money for the Carma Foundation, whose purpose is to measurably improve the health of poor and vulnerable women and children in Haiti. To improve education, healthHaiti is one of the poorest in the Western hemisphere

The evenings highlight will be the recognition of Mr. Danny Glover, Representative Alcee Hastings, & Mr. Fritz Racine by Ambassador Raymond Joseph and Melky Jean, on the behalf of the Haitian and Haitian American communities.

The Haitian Art Society will serve as the curator for an exhibition of RARE Haitian Art Masterpieces and DC area students whom were inspired by the Haitian Masters. The evening will culminate with a live concert by International Recording Artist Melky Jean with her Tribute to Soul Music, Belo with an acoustic performance, Abiodun Koya Soprano Opera Singer, and Rafrechi Compa Band with live Haitian Carnival performers.

The mission of Carma is to measurably improve the health of poor and vulnerable women and children in Haiti. Carma effectively utilizes media and pop culture to create a platform of awareness, dialogue, and then action. Carma, an urban spin on karma, embodies the belief of cause and effect behavior or practices to affect the lives of others. It is with this belief that Carma mobilizes others to not only care, but to become involved. Since its inception in 2007, Carma has already impacted the lives of tens of thousands of Haitian women and children and plans to extend its reach to the millions of Haitian citizens.

Chic In The City: Kate Michael »