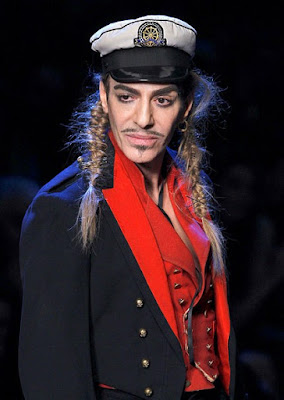 Christian Dior has severed ties with its creative director John Galliano, who is accused of accosting a couple in Paris last week and verbally assaulting them with anti-semitic remarks. In a statement released by the French fashion house today, it had begun the process of releasing the fallen designer and cited his “odious behavior and comments”on a video released to the British tabliod The Sun as the reason for dismissal.

Dior’s chief executive, Sidney Toledano, said, “I condemn with the greatest firmness the comments made by John Galliano, in total contradiction with the essential values which have always been defended by Christian Dior.”

Galliano’s dismissal is effective immediately but his final collection for Christian Dior will still show this Friday in Paris.  The designer is touted as reviving the French fashion house with his critically acclaimed eccentric couture and pret-a-porter collection. Galliano’s absence from the fashion house will most likely not cripple the company’s earnings since its bottom line is in beauty, fragrances and accessories.

The move by Dior, an LVMH brand, to distance itself from Galliano is not only the right thing to do, but a smart business decision as well. Actress Natalie Portman, the face of Miss Dior Cherie perfume, condemned the designer’s actions.


In a statement released to The Associated Press, Portman said, “I am deeply shocked and indignated with Gallianos statements that have been revealed in the videos. In order to the latest video and the fact that I am proudly jewish I dont want to be associated with John Galliano in any way. At least I hope that this horrific statement remind us that there are still cruel prejudes and we need to reflect and antagonize them.”

It is unclear who LVMH will choose as Galliano’s successor but many speculate the candidate might be in-house or one of the designers from Galliano’s team. A few guesses from the Daily Front row included Giambattista Valli, Peter Dundas, Haider Ackermann and Alessandra Facchinetti.