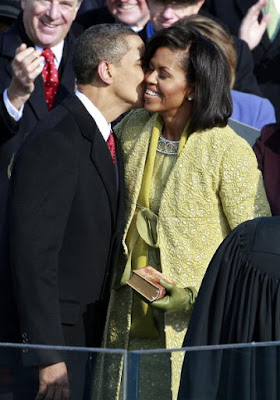 The Washington Post just revealed the cover girl for the March issue of Vogue. No it’s not Chanel Iman. Stumped? It’s none other than our FLOTUS (First Lady of the United States) Michelle Obama, who becomes the second first lady to grace the cover of the leading magazine in the U.S. Don’t hold your breath if you think you might see some leaked pictures on here because they are being kept under wraps. What you do get however, is a description of one of the pictures. Use your imagination and wait for the issue to hit newsstands. As WaPo reporter DeNeen L. Brown reports, Michelle was photographed by famed photog Annie Leibovitz in at the Hay Adams Hotel in Washington.

In the cover photo, taken by Annie Leibovitz, Obama is leaning on a soft beige sofa at the Hay Adams Hotel, where the first family stayed days before the historic inauguration. Obama is wearing a magenta dress by designer Jason Wu, who designed her inaugural ball gown. Her hand rests under her chin. Her left hand folded beneath her. She is wearing a diamond that you do not often see her wearing in recent appearances. Behind her, light streams in between curtains. It is the pose of the odalisque. [WaPo]

So wunderkind Jason Wu is having the best year ever. First, Michelle wears his gown for the inauguration ball now she rocks another Wu piece for the cover of Vogue? I guess Michelle was Wu(ed) when she saw the American designer’s collection. Another Michelle favorite gets a mention in the post article, Narcisco Rodriguez. Rodriguez outfitted the first lady on election night as she feted her husband’s victory.