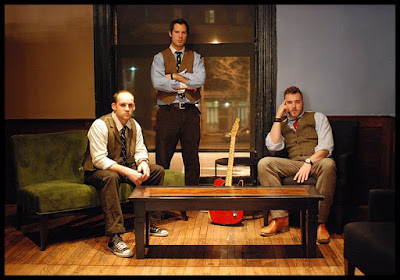 Favorite Georgetown watering hole Smith Point is the place to be tomorrow night. The venue in conjuction with Blonde Charity Mafia starlet Katherine Kennedy is hosting a $20 open bar party to launch the band Miles Midnight and their studio album While They Sleep from 9:00 p.m. to 11:00 p.m.

Songwriters and vocalists Sean Gaiser, Billy Glading and rapper/producer Matt “Chew” Corrado make up this pop trio whose singles like “Flee the Scene” and “Better With You” hit the Myspace airwaves have a familiar sound reminiscent of summers listening to a poppier Sugar Ray.

Miles Midnight will be giving away a free CD of While They Sleep and will be premiering their single “Try Me,” which will be featured on the upcoming reality show “Blonde Charity Mafia.” The fun doesn’t end there because for one night only, Katherine Kennedy will hop behind the bar as the night’s mixologist. I hope she’s ready for my Vesper martini and Alabama Slammas! Proceeds from the night’s event will benefit the Washington Humane Society’s Fashion for Paws. You can visit the band page on Myspace to preview their album before tomorrow night.