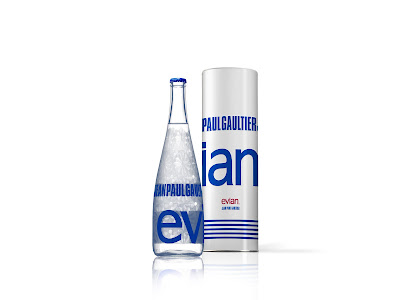 The two bottles, a Prêt-à-Porter and Haute Couture, are in limited release and are set to make their U.S. debut soon. The Evian Haute Couture bottle is just rare to get as it is to get your hands on an haute couture gown by the designer. Evian is releasing on seven of them.

The company will take the seven bottles on a global tour and will more than likely end up in a museum somewhere. The easier to find Prêt-à-Porter Evian Natural Spring water is now available online. You too can get your hands on these beautiful bottles bedazzled with interlocking snowflakes that recall the crisp, icy mountain tops of the French Alps where Evian Natural Spring Water comes from. A single bottle will cost you $13.95 while a case of 12 will cost about $118. Evian Natural Spring water plans to release there limited edition 2009 Jean Paul Gaultier designed bottles in the top five star hotels, restaurants and exclusive night clubs.