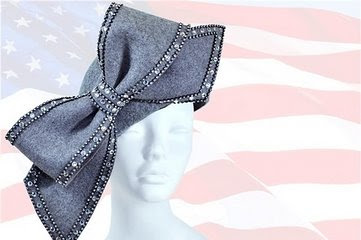 There’s been mixed reviews about the hat Aretha Franklin wore at the swearing in ceremony of President Obama but one thing is for sure, it’s a hat no one will ever forget. The songbird wore a gray wool felt and Swarovski-crystal hat that was a customized version of a hat created by Detroit-based Mr. Song Millinery. Dreams of spring Gold Cup races and Courage Cup danced in my head as I watched Ms. Franklin belt out the melodic notes she’s known for. Put a bow on anything and I will love it. Since the hat’s debut at the inauguration, Luke Song, chief executive officer of Moza Inc. which owns the hat label, says the hat (appropriately named Aretha) has sold over 1,000 of them. At just $179, I want one for myself.