All eyes were on Hollywood tonight for its biggest night, the 83rd Annual Academy Awards and though   thespians were more worried about who won awards, the rest of America was glued to the television to see the jaw dropping gowns.  Trends were set and some were dropped – actresses bid the one shoulder look goodbye and opted for strapless and figure hugging frocks.  The most exciting thing after the red carpet was Oscars co-host Anne Hathaway’s various dress changes, which were all styled by a very pregnant Rachel Zoe. Here are a few of my picks for the best dressed. 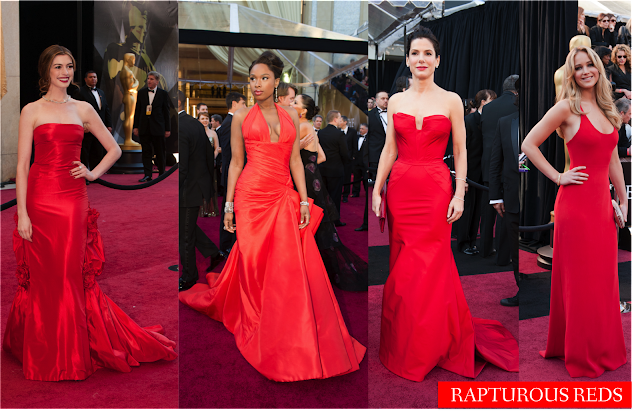 Anna Hathaway arrived with legendary designer Valentino Garavini in tow on the red carpet wearing one of his creations.  The gown would be one of many she would don throughout the night but the red frock with matching red nails and lips was perfectly pretty to make an entrance.
Jennifer Hudson has been the talk of Hollywood because of her dramatic weight loss and made an equally dramatic entrance in a persimmon colored Versace gown.  The dress hugged her in all the right places, showing of her toned arms and whittled waist.
Sandra Bullock chose a lovely red strapless Vera Wang gown to present the Best Actor award at the Academy Awards tonight.  She looked radiant with rouged lips, pulled back hair and a red clutch.
Jennifer Lawrence chose the perfect gown to show off her svelte figure.  The red Calvin Klein Collection complimented the stunning and leggy blonde.  Her wavy hair was perfect for the youthful frock. 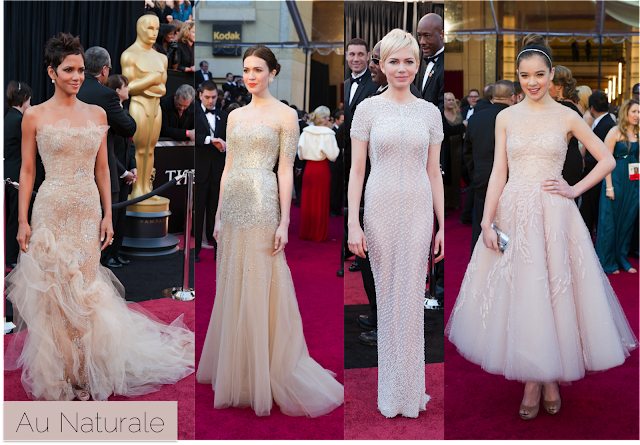 Halle Berry can do no wrong on the red carpet.  Her nude Marchesa gown with chiffon and tulle confections enveloping the bottom and train was a welcome change from all the dark gowns we’ve seen her in on this year’s awards season red carpets.
Mandy Moore went once again with a Monique Lhuillier gown for the red carpet.  The actress, who later appeared on the stage to sing the Oscar nominated song from her movie Tangled, looked breathtaking the nude Lhuillier gown with a sheer neckline and glitter embroidery adorning the bust, arms and waist.
Michelle Williams is no doubt a classic beauty.  With her platinum pixie coif and adorable face, she dazzled on the red carpet in Chanel Haute Couture gown, which made her look very statuesque.
Hailee Steinfeld was very adorable in a Marchesa below the calf dress she co-designed.  The neckline was similar to Mandy Moore’s Monique Lhuillier gown but looked age appropriate on the 14-year-old Oscar nominated actress. 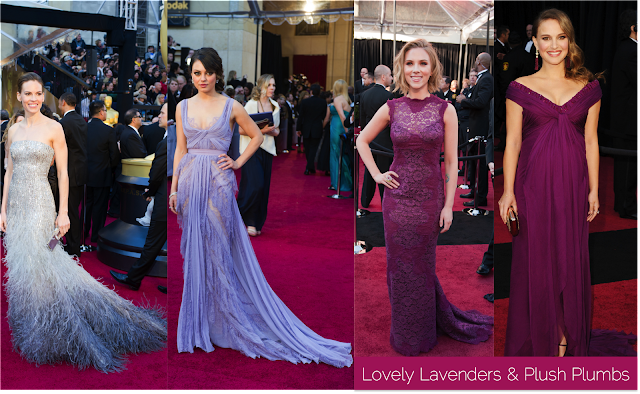 Hilary Swank’s  Gucci Premiere Couture gown looked stunning on her.  The nude gown had a dramatic lavender train that added the splash of color she needed to compliment her tanned skin.  The actress kept jewelry to a minimum but I wish she would worn bigger earrings to add more drama to the dress.
Mila Kunis was the favorite of many bloggers and tweeps at this year’s Academy Awards.  Her lavender and nude Elie Saab gown was figure flattering.  A peek-a-boo lace bust was very sexy and alluring. Her dark tresses, pulled back, and rouged lips completed her look.
Scarlett Johansson looked stunning in Dolce & Gabbana lace frock.  The bust of the dress slightly see through but tasteful.  The open back gave the dress more sex appeal.  I do wish her hair was a bit more clean.  She would have looked better with a few more extensions to add length.
Natalie Portman walked away with the Best Actress statue for her performance in Black Swan.  She paid homage to the co-costume designers Kate and Laura Mullheavy, by wearing a plum frock designed by the Rodarte girls.
Close